If you aren't yet familiar with the Tournaments feature of MRR, please visit the About Tournaments page.

The Tournaments feature incorporates Team Rankings, if you so desire.  It just requires a few specific settings for Teams and Tournaments.

The Team section of MRR was originally created for members to keep track of their Teams in the RR3 app.  Now that Teams are also used in MRR, you need to indicate how your Team is to be used.  Note that if you select "RR3 Only", your Team will not be included on any Team Tournaments.

In order to have your Tournament show the Team Rankings table, you just need to check this box:

This will not exclude members who do not belong to a Team from posting entries for your Challenges/Tournaments.  Their results will simply not be included in the Team Rankings.

Once members who do belong to Teams post entries in one or more Challenges that are part of your Tournament, you will see a Team Ranking table similar to the example below: 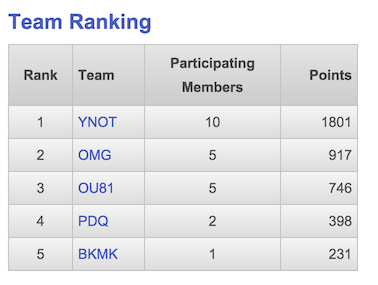 To make it easy to find Tournaments that are for Teams, you will see a Team icon on the Tournaments listing pages, for each Tournament that has the Team Rankings option selected, as shown below:

Currently, the system does not prevent a member from being assigned to more than one Team.  In fact, since Teams can now be used for "RR3" and/or "MRR", it is very likely that some members will belong to two different Teams.  However, if someone who participates in a Team Tournament is a member of two or more Teams that are designated as being used for MRR, you might see that member's results duplicated for each Team to which they belong.  The screenshot below shows an example of that condition: