The Tournaments section of MRR has the same tabs as the Challenges section - Olympics, Time Trials, and Others.  An example of an active Tournament is shown below.

The left column shows the hosting member, along with their member avatar or optional Tournament logo.  Below that is the time remaining for the Tournament, which reflects the maximum time remaining for all Challenges assigned to it.  The same indicators described in the About Challenges page will also be shown for Tournaments - either Completed, No End Date, or the countdown timer.

In the right, under the title of the Tournament, you'll see the Ranking method (Include all, or Exclude lowest), and all the Stages (Challenges) assigned to the Tournament.

The "Rankings" links will take you to pages showing the current rankings for each Stage.  If any new entries have been posted since last time you viewed the rankings, they will be shown to the right in red.

Use the Overall Rankings link in the lower right corner to view the combined rankings for all Stages.

The number of comments is shown in the lower right, with "new" comments shown in red in the same manner as with rankings.  If no comments have been posted, you will still need to use that link in order to add a new comment.

If you are the host of the Tournament, you will see the "edit" link in the upper right, allowing you to modify the Tournament details.

Enter a title for your Tournament.  As with Challenges, however, please try to keep it at a reasonable length so that it will fit within the right-hand portion of the Tournaments List pages.

This determines where your Tournament will appear in the Tournament pages.

As shown above, the two values for Ranking method are:

Use this field to specify the maximum number of points to be assigned to the first place position in each Stage results table.  Each subsequent position - 2nd, 3rd, 4th, etc. - will receive one point less than the position above it.

Enter the Stages (Challenges) that are to be included in this Tournament.  You may enter as many as you wish by using the "Add another item" button.

If you are hosting a Tournament that will consist of a series of Challenges scheduled one after another over a period of time, you may first create the Tournament with only the first Challenge assigned, then add each additional Challenge as they are created.

Another way ongoing "Series" could be structured would be to have the Tournaments overlap.  Consider the following example...  If you are going to have a new Challenge each week, and want to show rankings for a 4-week period, you could set up the first Tournament to cover weeks 1 through 4.  Then the second Tournament would cover weeks 2 through 5, and so on, like this...

With this approach, newcomers could join the in-progress tournament at any time without having to wait up to four weeks for the next one to start. 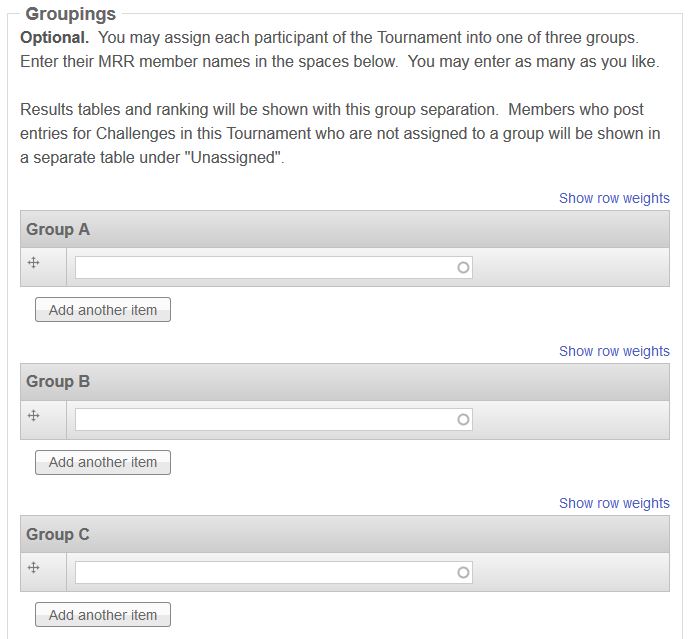 In order to make each Tournament more competitive for players of widely varied skill levels, you can assign the participants into one of three groups, and the ranking tables will be shown with those groupings.  Even though only groups A, B, and C are shown above, there are actually four groupings available.  Any particpiant that is not assigned to one of the above three groups will be shown in the "Unassigned" group.  By the same token, if you don't want to use the grouping feature at all, just leave all groups blank and all participants will be shown in the "Unassigned" group.

If you wish, you may add a logo to your Tournament.  It will be shown on all the Tournament pages above your name.  If you do not use a logo, your member avatar, if available, will be shown instead.

You may use the Guidelines field to describe your Tournament and/or provide any special instructions associated with it.