Ok, this thread is becoming the Official Rules Index, and I will soon try and write the basic rules so that by making things square.., it becomes more... round. (Makes sense?)
We also don't want our fellows just not having a handy source for the rules. (Shame on FMEA)

General rules - (in progress)
Start with 20 tickets, which if spent are refilled each 30 minutes.
Each Boss level is composed by 2 to 3 challenge races, plus the Boss race.
Each race costs 2 tickets.
Each challenge completed provides an increasing quantity of points.
Each Boss race won will send the points gathered during challenges to your bank: 300,000 points are necessary for completing the event.
Driver's level increases at determined amounts of points banked, unlocking new rosters with more powerful cars.
Failing or quitting a race will send you back to challenge 1, but you keep your current car roster and banked points until the last Boss race won (challenge points obtained after that are lost).
. . .

Another sources are Gauntlet 6 thread and RR3 Challenge Overview.

Fact A - switching screen OFF doesn't pause the game: "double tap my device's home button and quickly swipe the app away to kill it" (thanks AudiR8cer)
Fact B - can't force-close before red flag, dang!

Rule # 3 - Costs for refilling tickets is proportional to the number of tickets missing: varies from 2 to 25, for amount of missing tickets from 1 to 20.

Rule # 4 - Max number of runs is apparently unlimited.
Rule # 5 - Time for completion is 10 days from event opening, independent of when you start it. 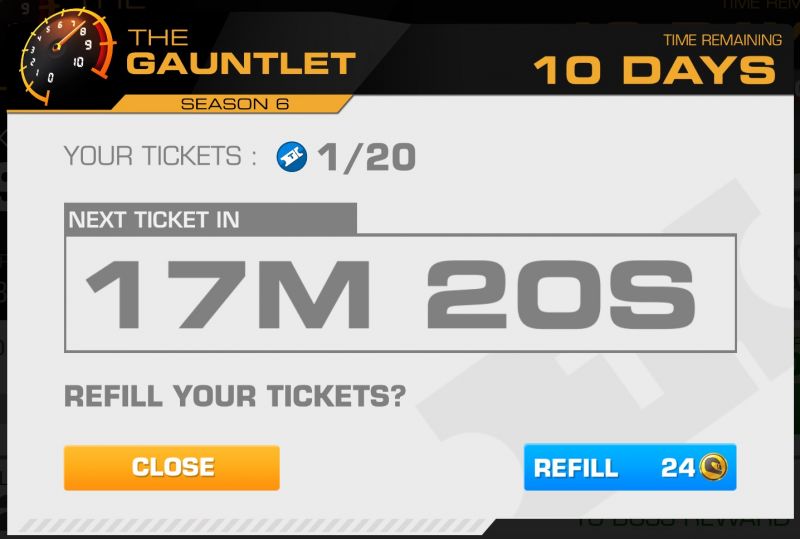